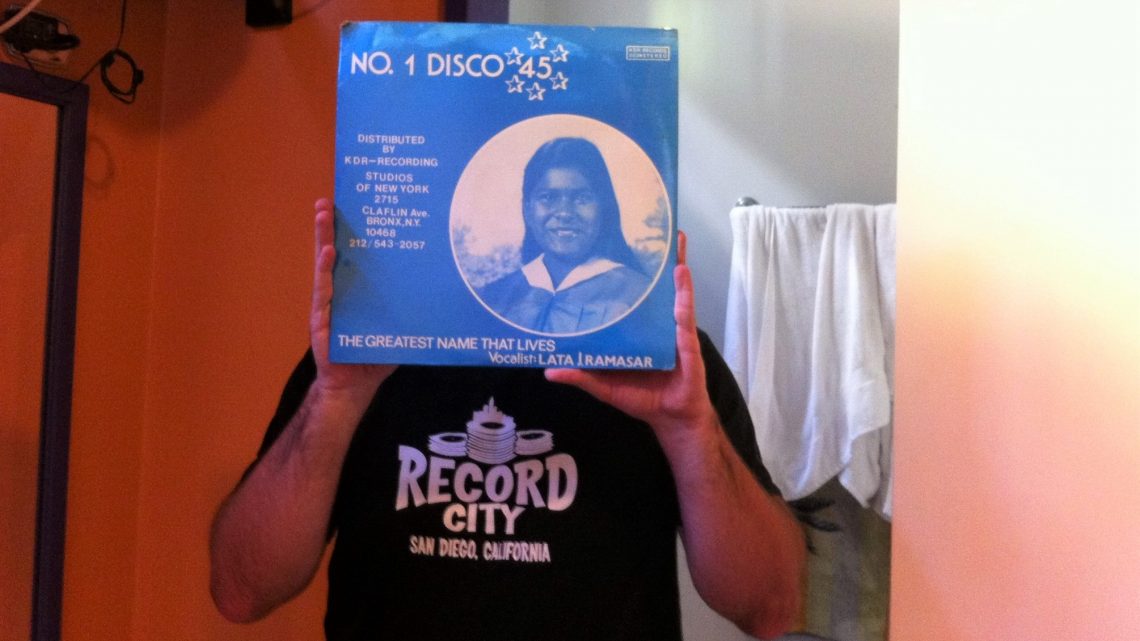 He was robbed by police officers, fatherly guarded by record shop owners and was at home with “Disco Illusion” maker Stephan Encinas: Pepe Hausius, DJ and label operator based in Offenbach, has seen a lot on his long-distance trips. Discovering obscure and country-specific records is an integral part of his musical sightseeing tours. The collector tells a few stories about it in the interview.

Pepe, you’ve been around a lot. Which countries have you visited in the meantime?

How many countries exactly I don’t know. I mainly traveled to Central America, East Africa and the Caribbean and traveled to most of the countries there. But since I always travel extremely slowly, it could be a lot more. If I like it somewhere, I usually stay until I no longer have a visa or am kicked out.

„Digging“ records is part of your travels. Do you choose your goals according to your passion for collecting?

In Central America and the Caribbean, my taste in music played a big role. When styles are so strongly culturally linked to countries, hearing usually automatically triggers completely unrealistic images about the respective country.

I went to East Africa out of curiosity about its culture and to subject my privileged European compass to a reality check. Music came later. But no matter how you do it, you can almost always find something on records or tapes. Even the smallest islands in the Caribbean like Dominica or Barbados have their own style.

I often feel that I only understood the music of the countries after I was there. For example, I couldn’t do anything with Cumbia before I was in Colombia or with Zamrock before I was allowed to experience Zambia. But I don’t want to spoil my vacation if the prey turns out to be worse and I don’t want to spend all my time with it. The world has more to offer than just records. Without the experiences and stories with other people it would all be pointless. There is always a balance between vacation and „diggin“.

What is your most spectacular find so far?

Hmm, I don’t know. How do you fix that? At the price? But I can think of a story. I had found a sealed copy of Lata Ramasar’s „The Greatest Name That Lives“ for almost nothing. Stupid as I am, I didn’t have the heart to open it and then let it be talked out of me much too cheaply, because I believe that if I can’t play it, someone else can use it better to hang it up. Ultimately, I don’t want to be a museum and don’t need tens of thousands of records for my ego. At the latest with every move you notice how shitty that can be.

Spectacular in terms of emotional value is actually everything that I haven’t known yet or have searched for a long time and find cheap or at least for an acceptable price. For me this is actually more of a challenge, because with the right budget and platforms such as discogs, eBay etc., almost everything can be ordered immediately today, for which you had to search for several decades and also needed luck. Also, a lot is being re-released today. There are tons of great things, but somehow it’s sometimes too much when every second ten-euro record comes out again. But to finally answer your question: There’s nothing like the feeling of discovering real pearls yourself.

Did you also travel in Corona year 2020?

Well, yes. But nothing major, since I only came back from a longer trip in December 2019 and had to make some cash first. I was in Athens in March. The plan was actually a week. When we landed, the first airlines stopped operating and it was unclear whether we could return to Germany. After two days I rebooked our flights and went home. Absolute shot in the oven.

What do you actually do for a living when you’re not into music?

I am a carer. And anyone who knows me knows that it fits like a fist in the eye. Even if the job sometimes has its annoying sides, it gives me the freedom for this lifestyle. As a carer, you don’t even have to write an application to get a job. And so I can always work a year, save a little, quit and travel for a few months, digging and taking care of other things. In addition, the job brought me through the Corona crisis in an extraordinarily privileged way.

When you were a guest on the radio show for a better tomorrow on Radio X, you told a few stories from your travels. Which experience is particularly important to you?

My first trip to Trinidad is probably always mentioned first by me. That changed a lot about the way I collect. In fact, collecting is partly a means to an end. In this way you get to know the city, the country and the people in a completely different way. The lasting acquaintances and friendships, the memories and the insights you get are the real gold. Even if, as a privileged European, one is often only perceived as a running dollar bill.

“The visit to Stephen Encinas at home was definitely great, when he played ‚Music in Me‘ and ‚Rock-a-Bye‘ on the piano.“

Nonetheless, I was really lucky. Whether I was taken to the rancid clubs in Lusaka to be the only white man to look like a broomstick among the busy ladies or whether I was robbed by corrupt cops in Maputo and then thrown out of the car somewhere. One should be prepared for this. And as long as I stay healthy, everything is fine.

The visit to Stephen Encinas at home was definitely great, when he played “Music in Me” and “Rock-a-Bye” on the piano. Another positive experience was in a record shop in El Salvador, which was in a zone that was actually taboo for strangers (especially for tourists). It took me four tries to find an Uber driver to take me there. When I got there, I immediately realized that people don’t tell stories. As soon as I was out of the store to have a smoke, the gang members targeted me. However, the owner was the complete opposite. He took care of me, even though he was around 80 years old. Since my Spanish is bad, we could hardly talk.

In the end, I came in every day of the week for a week to search his shop. And every day, he would wait for me with a smile, order lunch for me, get me a driver back and look after me like his son. A great person who I will never forget and who, as a German, shows me how incredibly big the differences are in terms of hospitality. I notice that almost everywhere outside of Europe. Maybe only because Germany is doing the worst there.

Have you already made vacation plans for the future?

The topic is always omnipresent. There are always a handful of countries in mind. But for known reasons, it is currently difficult to implement. But yes, I’m sitting on hot coals. Exactly where it will go next is not yet foreseeable. I’m very spontaneous and flexible. Credit card, passport, cell phone, my portable turntable and clean knickers, you’re ready to go.

You grew up in Dresden. How did you get into music and which genre sparked your passion for sound?

I actually grew up in Görlitz, but moved to Dresden when I was 18. In Görlitz there were some great guys who were all a few years older and always seemed like the coolest dudes to me. They played a lot of Golden Era hip-hop back then. Only then did I realize in Dresden that there was a lot more good music to be found.

There was a record store called “Sure Shot” and it was the meeting place for some talented guys and doers like Cuthead or Gordon from Project Mooncircle long before the success came. I didn’t find the atmosphere there anywhere after the shop closed. There Micha, the owner, showed me the „Endtroducing… ..“ by DJ Shadow and somehow nothing was like before after that.

You currently live in Offenbach. I remember that you lived in Mannheim too, right? When did you actually leave the east?

I left the east around 2009. I needed a change of scenery once. However, 20 years later this has still not changed. I can’t take it anywhere longer than seven or eight years. I actually only wanted to stay in Mannheim for three years. But shortly before that I met my girlfriend and hung on for another five years. Even if I hated Mannheim at the beginning, I am always happy to be there today. But Dresden was and always is my great love.

With your label „Born to Shine“ you have been releasing modern electronic funk and soul since 2016. The last record came at the end of 2019, unfortunately nothing more followed. Is the project currently on hold?

At the moment, yes. It’s always difficult to get everything under one roof. Preparation of the pressing, then self-distribution and marketing, finances. Plus a job and always away for a few months. You don’t have to compromise on your own, but I’m more of an amateur level with many things or I hate doing promos. With several people you can put something on completely different legs.

It will certainly continue. But how, when and where will show in the next few months. I just have to prioritize the many thoughts and ideas in my head. But I don’t stress myself. I’m already very satisfied with how things went with the label and learned a lot about music and people from it.

In December you started the monthly radio show World on Wax on the Indonesian platform norrm.com. How did that happen?

I don’t know exactly myself. I think it has to do with our last “Born To Shine” release (Midnight Runners – “Kuda Arabs 7”). Munir aka Midnight Runners comes from the same town and hangs out with the people there. Then they asked if I wanted to. The guys are a cool group and seem to rock Bandung a lot. Should go there on occasion and say hello.

You recorded an exclusive mix for the interview. Finally, please tell us something about the selection of the pieces.

Mostly calypso and Latin funk, but also cumbia, kaseko. Everything that somehow promised while browsing. A mixture of classics and unknown stuff for one or the other. Mainly 45s because it has become my all-time favorite format over the last few years. However, there was no plan for this mix. Searching out and listening is actually always the most brilliant part for me. One plate reminds me of the city, the other of the store. Somehow I never get bored.

More information about Born to Shine is available on Bandcamp and Soundcloud.