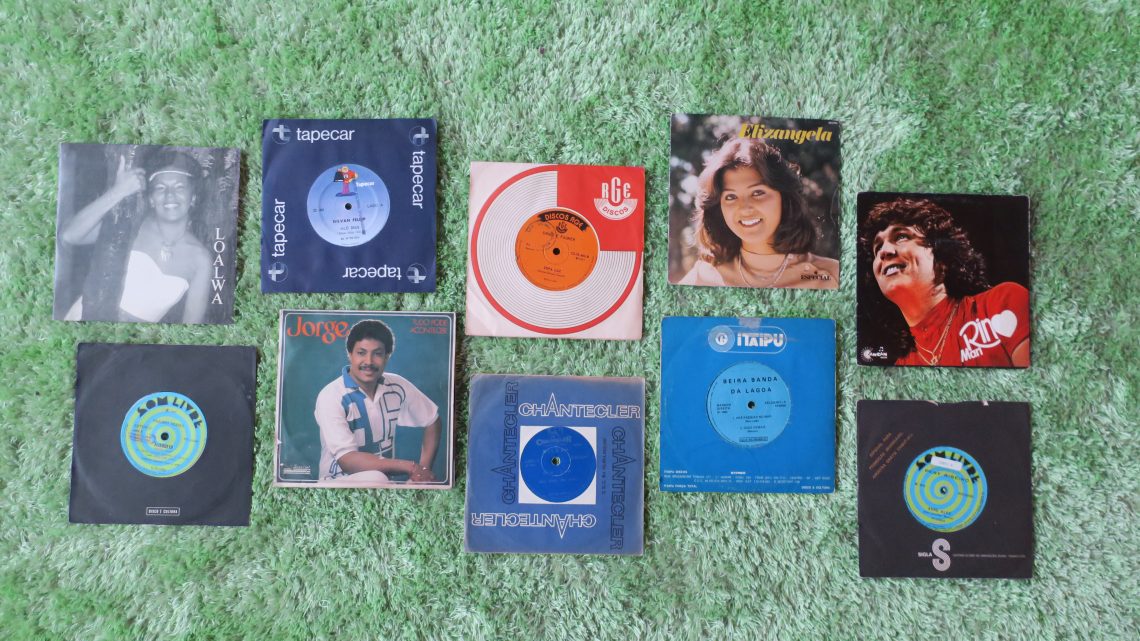 “Grooves raros e esquecidos com novos frescores e vida! Rare and forgotten grooves with a new freshness and a new life!” Joao Gabriel aka DJ Bill, a Brazilian musician from Belo Horizonte, finds words of praise for the record “A Trumpet Saved My Life”, on which Constantin Sankathi and Siggatunez again re-edited four old “Compactos“ (7 inch records) from Brazil. Sankathi pulled a few favorites out of his singles box for us …

Africa is THE continent among diggers for obscure synth-boogie records from the 1980s, but Brazil also has charming low-budget productions to offer here. Anyone who likes spacey boogie / modern funk with a grandiose synthesizer hook should definitely hit Jorge’s only compacto.

Gilvan Fellip sings “Hello God” in this guitar- and brass-heavy samba rock tune (the genre “samba rock” in Brazil usually has little or nothing to do with rock as we know it). On closer inspection, however, this song of praise to the Lord has a more secular note: The song, written around the mid-1970s, is a hymn to the ABC Futebol Clube, one of the most famous football clubs in Brazil. In this context, even stadium chants sound deep and soulful!

Well stolen is better than no hit at all. That’s probably what Rino Mari thought, too, who in the 80s released a rock LP and a few singles with a leather vest and matching mat. However, this crazy masterpiece will be remembered: “I’m going crazy” is a cheeky copy of the Rolling Stones classic “Miss You”, which makes every Brazil dance floor shake. To drive you crazy!

Beto Scala from Sao Paulo has not only published numerous great songs as a musician, he also excelled as a composer for other artists. Milena’s first single „Se É Por Falta De Adeus“ from 1973 comes from his pen. The jewel can be found on the B-side: „Dim Dim“ is a relaxed samba groover with an almost magical vibe and, unfortunately, still completely underrated to this day. When I had this single on my turntable for the first time, it played in an endless loop for days.

What would the Música Popular Brasileira of the 1970s be without telenovelas? The series „Uma Rosa com Amor“ aired in 1972 and 1973, had 221 episodes and, as with most telenovelas, there was also a soundtrack on vinyl. The highlight of the record for me is the song „Elisabeth“ by Paulinho Soares, which can also be found on his first, albeit very rare single from the same year: A melancholy scrap somewhere between samba and big band sound with wonderful brass, piano chords and String parts.

Four singles from this list are in the Gouranga Mixtape: „Saved My Life’s Brazilian Mixtape“

As the voice of the band „Kaoma“, Loalwa Braz Vieira became world famous in 1989 with the million-seller „Lambada“. The first sound document available on vinyl by the artist, who was born in Rio De Janeiro in 1953, dates back to 1978: On the mini label Fonopress, she shines with two extraordinary songs that even low-budget production cannot harm. „Pode Chegar“ alternates virtuously between fast samba and rhythmic brass breaks and is bursting with energy. Loalwa Braz unfortunately fell victim to a robbery in her hometown in early 2017.

In the 1970s it became fashionable for actresses in Brazilian soap operas to try their hand at singing. In 1979, Elizângela do Amaral Vergueiro had a flawless disco hit in Brazil with “Pertinho de você”. However, she made her strongest appearance on her last single in 1981: „Vou Te Amar Semper Assim“ is heavily boogie-heavy in terms of sound and almost perfectly produced – no wonder, behind this rather unknown production, is the Brazil boogie legend Lincoln Olivetti . Much more astonishing, however, is who wrote the lyrics for this song: the writer and bestselling author Paulo Coelho (“The Alchemist”)!

In the early 1980s, six young musicians formed in northeastern Brazil in Maceió, the capital of the small state of Alagoas, to combine the MPB sound with rock and traditional sounds from their homeland. Beira Banda De Lagoa only managed to get one single – which is difficult to get even without a color cover and hardly at all with a color cover – but it has it all: The song “Doce Demais” is an incredibly cool synth boogie Tune somewhere between pop, new wave and reggae with a touch of acid (!), Which for reasons completely incomprehensible to me is still completely under the radar. Is it because there isn’t even an entry for the disc on Discogs?

In the late 1960s, many musicians in the Tropicalia movement were heavily influenced by psychedelic rock and American-style folk. This can be heard clearly on the first single by the songwriter Raimundo Fagner (here as a duo with the unknown Sirino). „Copa Luz“ is a wonderful homage to the Copacabana. A melancholy song that sounds as if the two would have liked to hear Simon & Garfunkel at the time: Casual acoustic guitar riffs pair with wistful strings and emotional vocals, in the background traditional ciucas round off the masterpiece. The original single is very rare, but luckily the song has been digitized and is available from the usual streaming services. Make sure to also check the much more psychedelic A-side!

It was common in Brazil for successful songs to be officially covered again and again. The Brazilian composer, pianist and singer Ivan Lins is one of the MPB’s great legends. His 1974 album “Modo Livre” is considered a milestone. It contains the song „Abre Alas“, for which Vitor Martins, his partner in Crime, wrote the lyrics. Immortal piano chords and a refrain for eternity merged into a gripping hymn that encouraged many Brazilians in dark times. There are several good cover versions of „Abres Alas“, but Pery Ribeiro’s one is the best: The samba and bossa veteran was apparently so enthusiastic about the song that he gave his back then already 13th record, that was released in the same year as „Modo Livre“, completely this album title. Pery’s version is less jazzy, less subtle, but it is a bit more direct and still hits the mark with its slightly kitschy pathos.